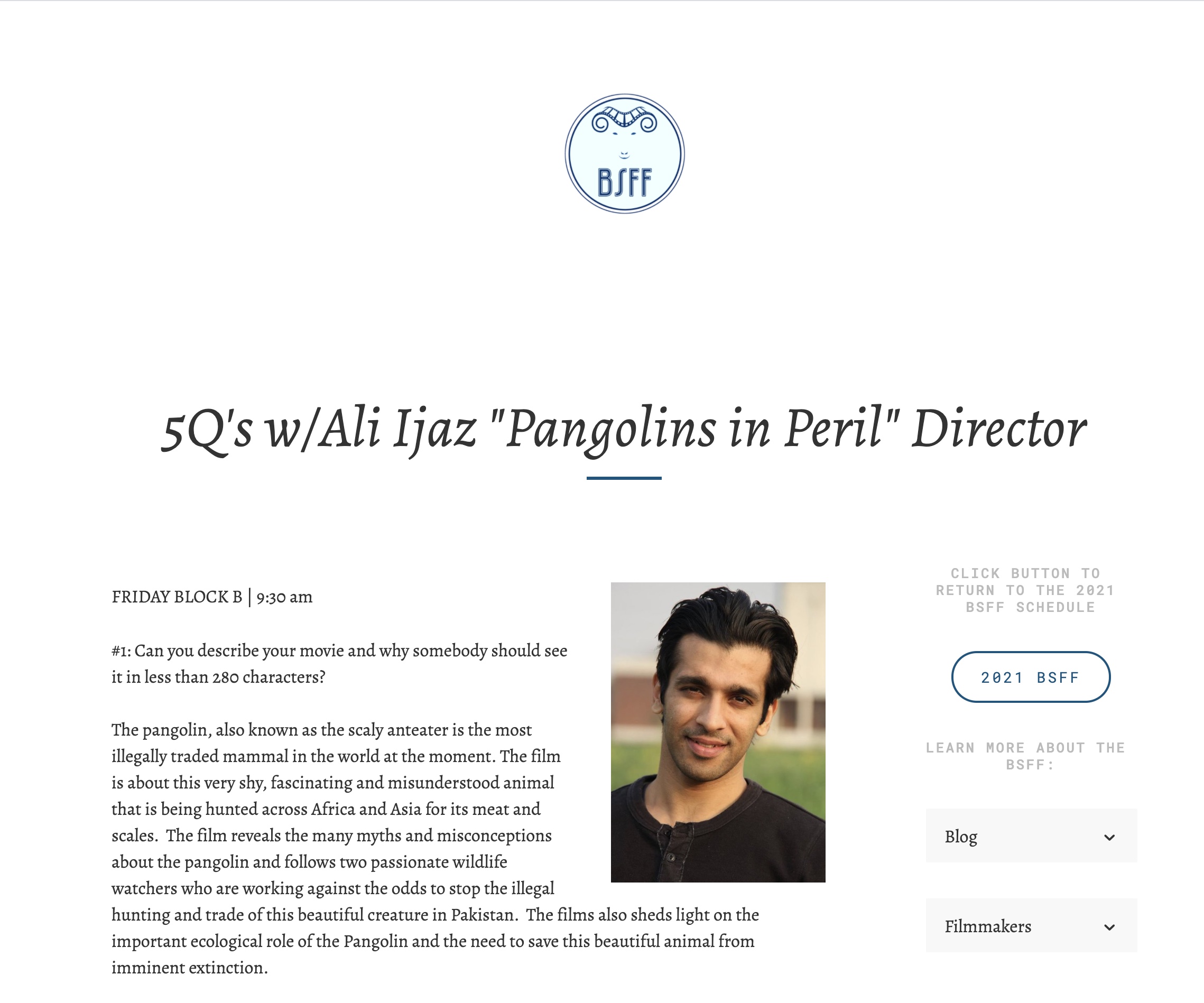 Posted at 12:55h in Uncategorized by admin

#1: Can you describe your movie and why somebody should see it in less than 280 characters?

The pangolin, also known as the scaly anteater is the most illegally traded mammal in the world at the moment. The film is about this very shy, fascinating and misunderstood animal that is being hunted across Africa and Asia for its meat and scales. The film reveals the many myths and misconceptions about the pangolin and follows two passionate wildlife watchers who are working against the odds to stop the illegal hunting and trade of this beautiful creature in Pakistan. The films also sheds light on the important ecological role of the Pangolin and the need to save this beautiful animal from imminent extinction.

#2: What do you want the Borrego Springs Film Festival audience to know about your film that isn’t obvious from its title?

Our wildlife and natural habitats are under threat and our natural heritage plays a vital role in shaping our culture. My film hopes to not only inform but also inspire audiences to the wonders of our natural world and give you a glimpse into the life of rarely seen animal like the pangolin.

#3: What is your movie making background? Tell us about yourself.

I have a bachelors in Film & TV production from the National College of Arts, Lahore, Pakistan. My personal interest is in exploring topics around culture, environmental issues and wildlife. My previous films have explored topics like the human-leopard conflict in Ayubia National Park , the disappearance of vultures across Pakistan and conservation of the rare Indus Blind Dolphin. There are almost no wildlife filmmakers in Pakistan, despite the fact that Pakistan is home to diversity of some amazing wildlife and a variety of breathtaking landscapes that need to be documented and explored thru film. I feel I am in a race against time, to document what remains of our natural history and to inspire other upcoming natural history filmmakers . I recently joined the Institute of Art & Culture in Lahore, Pakistan where i teach documentary filmmaking and also pursue my passion projects as well.

#4: What was the biggest lesson learned in getting your film made?

After many countless trips I had run out of money and time trying to find a pangolin in its natural habitat. It took me over a year to finally find and film a pangolin in the wild. The lessons i learnt: Never give up! Dead ends lead you to unexplored opportunities. Keep exploring and just tell a good story!

#5: What does the future hold for your film and you?

My film will be donated to WWF-Pakistan by the end of the year. WWF Pakistan will be using it for educational and awareness purposes by screening it in schools and colleges across Pakistan. Our children are the future guardians of our natural heritage, they need to know about our wildlife and about pressing environmental issues in our country. My film will hopefully help them develop a appreciation and understanding of these important issues.

There are so much i want to do in the realm of many unexplored topics on wildlife conservation, environmental topics that interest me. My upcoming project is on the Marsh crocodile that is on the brink of extinction in Pakistan. River pollution, hunting, over fishing and loss habitat have caused the marsh crocodile to disappear from all of the major river systems across Pakistan. The marsh crocodile is now confined to a remote river that runs through the beautiful and rugged Hingol national park in the province of Baluchistan.