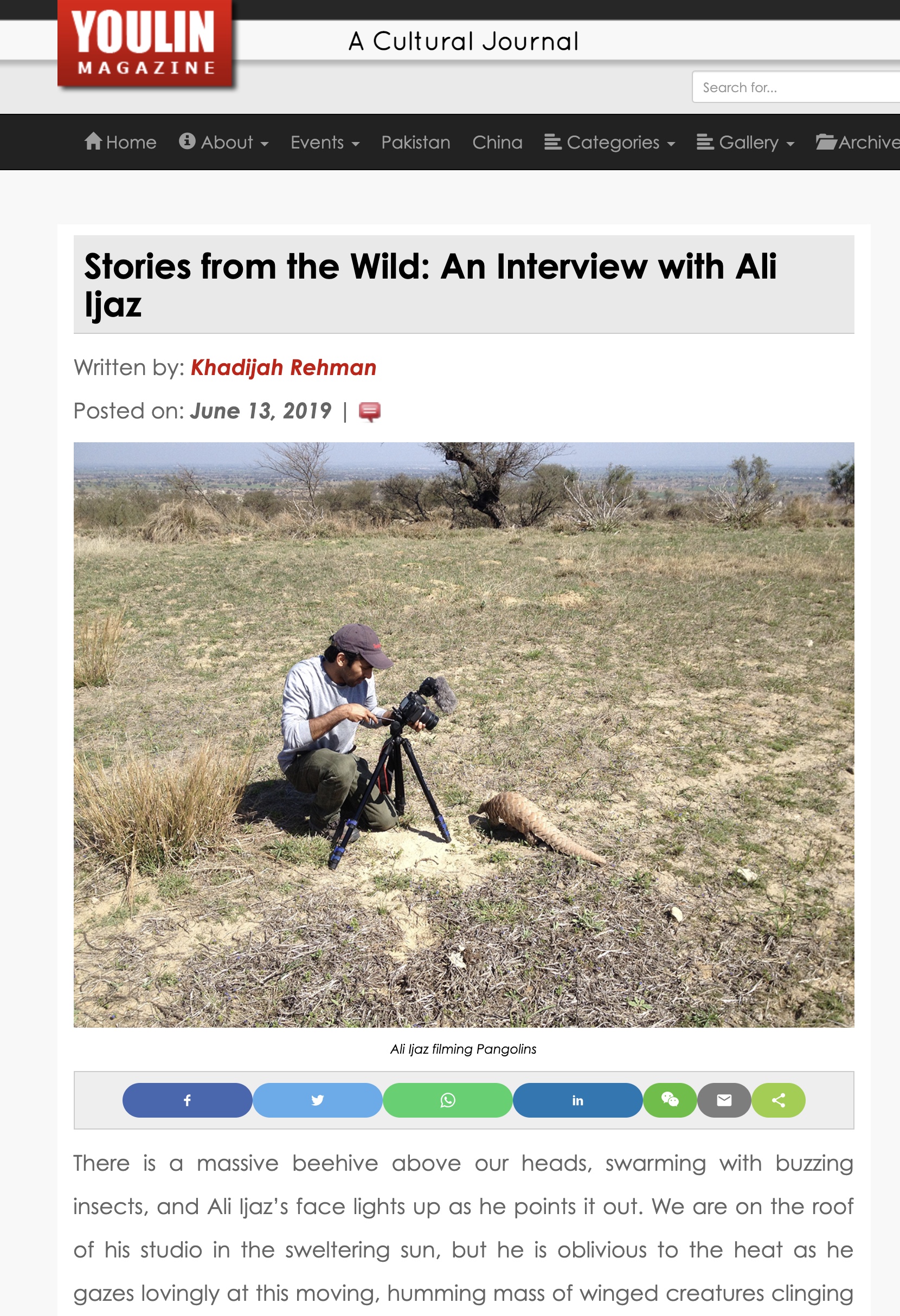 09 Jul Stories from the Wild: An Interview with Ali Ijaz

Posted at 12:15h in Uncategorized by admin

There is a massive beehive above our heads, swarming with buzzing insects, and Ali Ijaz’s face lights up as he points it out. We are on the roof of his studio in the sweltering sun, but he is oblivious to the heat as he gazes lovingly at this moving, humming mass of winged creatures clinging to a tree. If passion is a spark, Ijaz is absolutely ablaze. He talks of scaly pangolins and gigantic crocodiles the way one might talk of a work of art: in reverent tones of awe. A wildlife documentarian, Ijaz graduated with a degree in filmmaking from the National College of Arts (NCA) and it is evident five minutes into the meeting, for storytelling is his raison d’être.

Wildlife documentarians are rare in Pakistan, but Ijaz has known his one true calling since he was a child. He grew up fascinated by the voice of Sir David Attenborough, who formed the soundscape of his childhood. Even as a young boy, he was enraptured by a mongoose family in his garden. “Perhaps,” he muses, “my father being a veterinary doctor has played its part. I would go with him to his laboratory where he had rabbits and rats, and on the way we would pass an aviary, where there was a snowy white owl, a great horned owl, and a bald eagle. These were big, majestic animals, and I was enthralled by them.” Thus began his quest to document the wildlife of Pakistan, and in doing so, Ijaz has donned many a role: a storyteller, a myth-buster, a champion of animal rights, and an avid nature enthusiast.

The wildlife of Pakistan and the genre of documentary films are both hugely underrated, so the odds have always been stacked against Ijaz. He is baffled by how little the Pakistani public knows about the country’s wildlife. “My documentaries are an attempt to not only create awareness internationally, but also within Pakistan, of the kind of wildlife we have and the kind we have lost due to our nation’s trigger-happy nature. Local ignorance has led to little to no wildlife tourism. Our knee-jerk reaction is to kill anything we do not comprehend, and in attempting to film these non-threatening, beautiful animals, I act as a visual mouthpiece for the oft mistreated and misunderstood wild animals. This is where documentaries, or really any sort of art plays its part. Locally, the vulture, which was the focus of my thesis, is linked with death and considered an ill omen. Through my documentary, Missing Vultures, I explored its important role in the eco-system, and how its loss can be devastating.”

I ask about his experience and training at the NCA, and if his love for the rare art of wildlife documentaries created complications during film school. He graduated as part of the very first film and television batch at NCA, and was surrounded by aspiring music video directors and traditional filmmakers. Initially, his passion was met with some trepidation and a lot of inquiry as to why he did not want to explore other aspects of filmmaking. His thesis documentary, however, was very well-received. “It was unheard of for a student to receive funding for his thesis, but WWF partially funded my film. They have conservation centers for vultures at Chaanga Maanga and I managed to convince them that my documentary would go a long way towards supporting the cause.” Missing Vultures went on to win many international awards, including the WWF Living Planet award for Ali’s extraordinary contribution to the cause of wildlife in Pakistan.

He shows me photographs from his forays into the wild as we talk. Images of leopard prints in soft ground, an injured baby bird sitting in the palm of his hand, a rusting sign board warning of crocodiles; all forming a visual diary he has painstakingly maintained in his race against time to find and document endangered creatures. I ask what he thinks of the government’s policy of taking large remunerations to allow people to hunt endangered animals, such as markhors, as a sport. His views on the issue are surprising, for while he is deeply worried about endangered animals, he says this policy of trophy hunting has its benefits. “Trophy hunting has become a legal event, where a number of markhors every year is set aside for hunting purposes. It is debatable, but I am of the opinion that this has actually helped the wildlife. Because this remuneration benefits the local community, they ensure the animal is protected, well taken care of, and never hunted illegally at other times of the year.”

He worries about climate change and how it is going to cause further animal endangerment. “Deforestation has led to huge changes in the climate, and has left us with two to three percent of forest cover. If you talk about rising temperatures and rising sea levels, wildlife cycles are being disturbed, which is terrible.”

We come upon a photograph of a local conservation worker leading the way during one of Ijaz’s searches for a pangolin for his documentary Pangolins in Peril. I ask what the government is doing, if anything, for the conservation of endangered animals and for creating awareness. “There are wildlife departments but they consist mainly of locals who haven’t been trained well. They are just doing their jobs, based on what little knowledge or awareness they have. More organisations should fund projects that ensure awareness-raising and provide training to the departments involved in conservation. Research papers and essays are for specialists, but to spread real awareness, we need audio visual aid in the form of documentaries and workshops.” The government, he says, has created laws for the preservation of these wild animals. For instance, if one hunts an animal that is on the endangered species list, the consequences are a fine and jail time. Often though, it is not an effective enough deterrent, since neither the meagre fine nor the small jail sentence is serious enough to scare off the hunters.

However, Ijaz likes to believe the local audience is receptive to his message. “I love to think that anyone who watches a documentary I have made, comes out of it having a different perception of the wildlife here, be it a native or a foreigner. Even Pakistanis themselves are often amazed at finding out that an animal they have previously never heard of, exists locally. That lovely incredulity makes it all worthwhile.”

There is a severe scarcity of wildlife knowledge, so Ijaz feels that his is an uphill battle, though nonetheless one that benefits the public. “I am not the only local wildlife documentarian, but I am one of the very few. One such documentarian is Nisar Malik, who collaborated with BBC in 2006, to document the snow leopard in Pakistan. I remember a feeling of hope and thrill upon seeing his work, because he made it seem like wildlife documentary was not only possible, but could garner a wonderful response.” Ijaz was later approached by Nisar Malik to be part of his team as part of the Common Leopard Conservation Project, and that experience further fueled his love for wildlife.

What’s next for a man who has been among the vultures, pangolins and leopards of Pakistan? He is giddy with excitement for his upcoming documentary project, based on the marsh crocodile found in the Hingol River of Balochistan. “We had two species of crocodiles, throughout the Indus. These crocodiles are now near extinction, and one of their habitats is the Hingol River, in Balochistan. The Gharyal was a crocodile species with a long, thin snout, and was known to be the largest kind of crocodile, and twenty years ago it became extinct in Pakistan. The Magar Crocodile is the one I have based my current project on, mostly out of the apprehension that this species might become extinct too.”

Ijaz has already been to Hingol, and has bathed in the river where these crocodiles dwell, and for now, he has only seen the top of a crocodiles’ head. I ask how he manages to fund his documentaries, if it takes so long to find and film the animals. “I fund my documentaries myself. At times, I find like-minded people who are willing to provide funding to ensure the truth of our wildlife finds its way to the public.” When spending out of his own pocket, his day-job teaching filmmaking at the Institute of Art and Culture (IAC), Lahore, makes it possible to pursue his passion.

Ijaz is eager to talk about the wild animals of Pakistan and how precious they are. He is of the belief that often, it isn’t the animals that are wild or intrusive, it is human beings who fail to understand them. He tells me of his month-long vigil looking for a pangolin, and shows me a photograph of one, tightly curled up to protect itself. This scaly anteater might be a wild being for many, but Ijaz speaks of it as if it were magical. He talks of crocodiles in the Hingol river leaving large claw marks on the beach, and flying squirrels in Nathiagali leaping from tree to tree. He speaks of the din of these flying squirrels in the trees at night, which you can only hear if you are quiet, and patient. His eyes are alive, and in his voice there is a quality of veneration that is infectious. Such is the majesty of his documentary films that they not only challenge one’s notions and preconceptions about the natural world, but leave the viewer inherently and wholly transformed, as any spectacular work of art should.