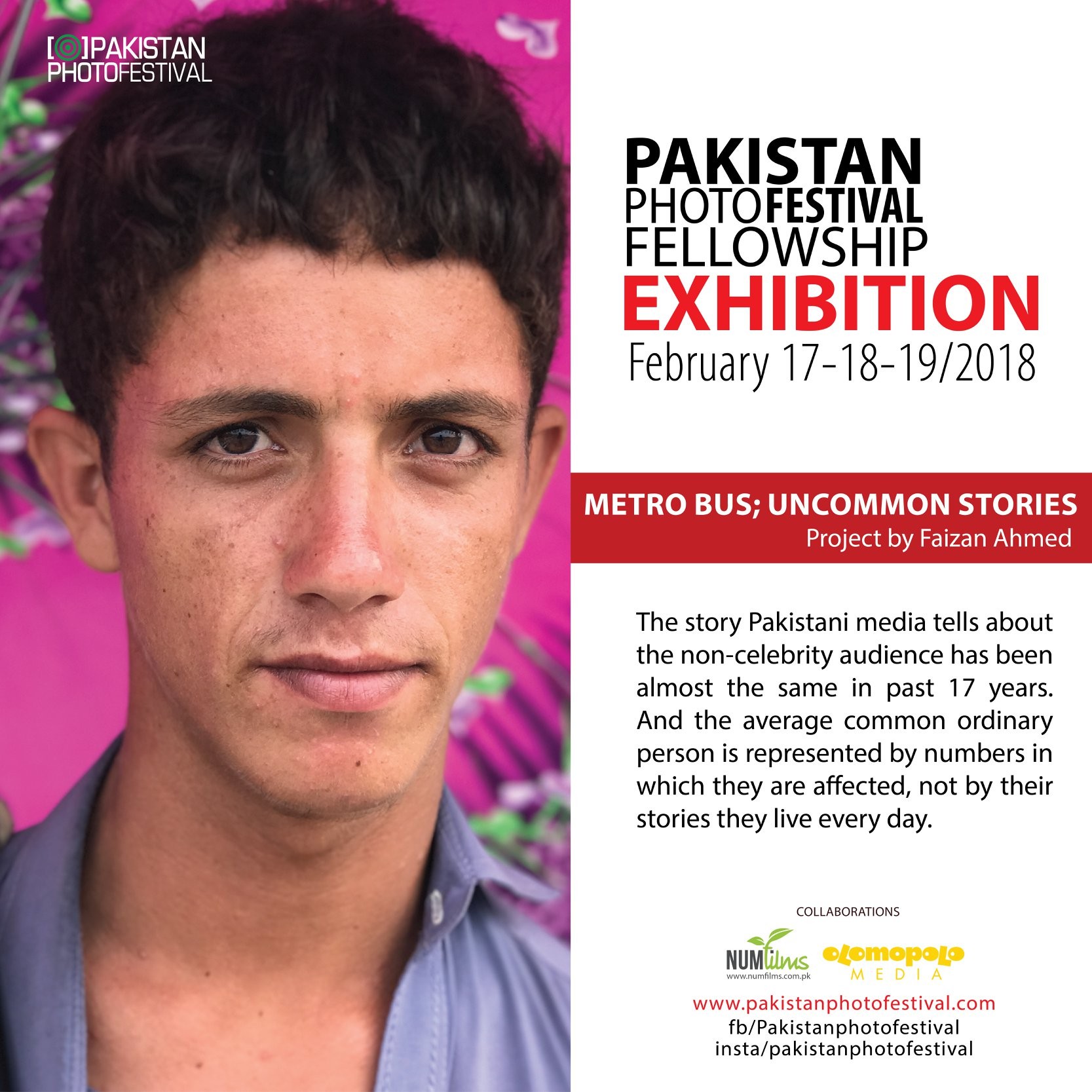 Posted at 12:20h in Uncategorized by

Following is the news along with the Link

LAHORE: The Pakistan Photo Festival (PPF) on Saturday launched its three-day street exhibition in Lahore showcasing creative documentary photography on pressing social issues.
The creative work of nine young talented photographers from across Pakistan and abroad drew the attention of commuters and the general public at the Kalma Chowk and the Canal metro stations in the city.
The photographers, who participated in a seven-month long fellowship in Lahore, produced thought-provoking projects on some of the most pressing social, economic, legal and rights struggles of the country, said a press release issued by the PPF last week before the exhibition.
World-renowned photographers Matthieu Paley, Asim Rafiqui, Didier Ruef, Mahesh Shantaram, Wendy Marijnissen and Shah Zaman Baloch mentored the aspiring young artists through extensive brain storming sessions in a bid to “contribute to the social fabric of society through the art form of photography,” read the Facebook page of the organization.
Mentored by Matthieu Paley, a National Geographic contributor from France, PPF participant Salman Alam Khan captured the colorful diversity of Narayanapura — one of Pakistan’s most significant compounds situated in Karachi city — in his project “Knitted Beliefs.”
“The Walled Street Journal” by Ema Anis presented life inside the gated community while Nida Mehboob undertook a compelling project named “Shadow Lives” on the discrimination faced by minority communities of the country. Her mentor was Wendy Marijnissen, a freelance documentary photographer from Belgium.
The PPF organizers have a strong reason for shifting the exhibition from traditional art galleries to metro bus stations.
“Only the elite visits the art galleries and common people have no access to those places. Metro stations are frequented by people of all classes and social backgrounds, by about 1.3 million people a day,” said Faizan Adil, a participant and organizer of the exhibition while talking to Arab News.
Adil produced a thought-provoking project titled “Industry of Dissolving Portraits” about nursing homes in Pakistan, mentored by Matthieu Paley.
London-based visual artist, Shaista Chishty, titled her project “One Pound in My Pocket,” which retraces one family’s journey from Pakistan to the UK after partition (secession of Pakistan from United India under British rule). She was mentored by Wendy Marijnissen.
Maryam Altaf, a Lahore-based photographer, put together a project on how ride-hailing services have subtly changed the economic landscape of the country. Her project, based on the stories of several drivers, is named “Conversations in Transit,” and was mentored by Asim Rafiqui, an independent photographer.
Aziz Changezi, from Quetta, completed a project titled “Scavenging for Wealth” on how recycling provides livelihood to families in Pakistan. His mentor was Didier Ruef, a documentary photographer based in Switzerland.
Faizan Ahmad, a storyteller who completed his project “From the Metro Bus: The Uncommon Stories of the Common People,” in which he highlighted the voice of the ordinary people. His mentor was also Didier Ruef.
Ramis Abbas is a Lahore-based artist. His mentor was Mahesh Shantaram, a photographer from India. His project, “The Past that Could Not Be,” is for students to help them imagine a kind of campus where they have a collective, consolidated, and legal political space.
In Pakistan, where most photography exhibitions are attached with the stigma of niche audiences and lack the trend of exhibition in public spaces, the PPF exhibition has achieved through this fellowship the goal to build a stronger social documentary photography practice in Pakistan by helping these selected individuals, note the organizers.